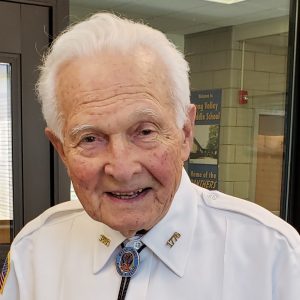 Awarded the Croix de Guerre and the French Legion of Honor
Kaare Allan Johnson, loving husband, father and grandfather, died peacefully at home on November 30, 2020. He was 96.
Allan was born on May 21, 1924 at home on Staten Island, NY, to Hildeborg Teresie (Teresa) Torjesson Vehus and Henry Johnson. His wife, Norah Patricia Ewell of Richmond, VA, preceded him in death in 1998, as did his younger brother, Kurt Viking Johnson in 2018.
He graduated from Curtis High School before entering the Army in 1943, volunteering for the paratroops. He served in the 596 Parachute Engineers in the 517th Parachute Infantry Regimental Combat Team, parachuting into southern France on August 15, 1944 as part of Operation Dragoon, the second-largest airborne invasion of the war. Injured in September 1944, he rejoined his outfit at the very end of active combat in early 1945. Allan returned home to his relieved family just days before Christmas in 1945.
Allan attended Harvard University before graduating from Wagner College in 1952, completing a master’s degree in 1960. He married Patricia in 1960 and had two daughters, Claire and Laura. He worked as a middle school social studies teacher for 34 years, 29 of them for Mendham Borough, until 1989. In retirement, he worked until early 2020 at Ramsey Outdoor as a sales associate. He was a past president of the Association of New Jersey Rifle and Pistol Clubs, and served on their board.
In 1999, Allan reconnected with his airborne band of brothers, attending reunions and returning to France – a lifelong dream. These visits became a summer staple as he returned to support heartfelt commemorations and gave rise to international friendships, culminating in his final visit in 2019 for the 75th anniversary of Operation Dragoon. He was a proud recipient of the French Croix de Guerre, the French Legion of Honor, and the New Jersey Distinguished Service Medal, conferred in April of 2020.