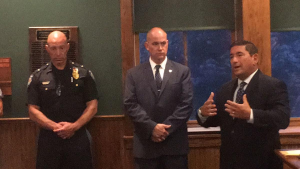 (VIDEOS) Police Department honored, rewarded during Washington Township meeting Mkitchin  / By MARK KITCHIN Sta Writer  09.19.19 WASHINGTON TWP. – The Police Department was front and center during the Township Committee’s Work Session on Wednesday, Sept. 11. The police department received declarations of appreciation on its work during a recent shooting, the occasion of receiving state accreditation honors and for naming its training center for former Chief George Kluetz. They were also the recipient of several donations from a non-prot organization that was created to help them and their families. The meeting started with the mayor citing the ocers for their bravery on Aug. 7, at the scene of an active shooting at a farm at 411 West Mill Road. Former Olympian Michael Barisone was arrested for the alleged shooting of Lauren Kanarek and attempting to shoot her ancee Rob Goodwin. Barisone will be tried on two counts of attempted murder. The Washington Township police responded after receiving 911 calls. “Multiple ocers responded quickly taking action to take down and arrest the shooter, provide immediate trauma care to the victim, saving her life, and securing the scene pending further investigation,’’ Murello read from the declaration. “On behalf of the Washington Township Committee, we acknowledge and thank the listed members of the Washington Township Police Department for their courage, competence and outstanding training, which allowed them to react and handle one of the worst situations an ocer can encounter.’’ The list of ocers who played some role in the incident included: Chief Jerey Almer, Lt. Mark Niemynski, Lt. Douglas Compton, Lt. Chris Bratus, Sgt. Brian Szymanski, Sgt. Michael Hade, Sgt. Brian Bigham, Sgt. James Burns, Cpl. Thomas Falleni, Patrol Ocer John Wurtemberg, Patrol Ocer Robert Brobst, Patrol Ocer Cory Lee, Patrol Ocer David Marut, Patrol Ocer Derek Heymer, Patrol Ocer Kevin Barnes, Patrol Ocer Andrew Tesori, Patrol Ocer Jason Hensley and Patrol Ocer Anthony Costantino. “Besides being surreal and hearing the call go out for an active shooter event with people wounded and not knowing what you are going into, the guys in the department, on the call, the follow up, the investigation, the monitoring of the person in the hospital and everything else, the job they did was incredible,’’ Almer said. “When we walked out of the house after clearing it, it was like a picture, a panoramic view. To the left was the victim, the boyfriend, the shooter, the squad, all my guys taking an active role and not skipping a beat one second. To say I’m proud of them is an understatement, they did a phenomenal job.’’ It was followed by a presentation of police department in celebration of achieving state accreditation. It was a goal the department has been battling to achieve for the last two years and 2,000 hours of work. The Washington Township Police Department nally earned that honor on June 13. “These guys standing there deserve the credit,’’ Almer said of his ocers. “I am proud of them. They do a great job day in and day out. They are professionals.’’ Next members of the Washington Township Veteran’s Association Post 1776 and their post commander Thomas McBride presented the Police Department with a plaque thanking them for their leadership, professionalism and service to the community. “The police provide support to our Memorial Day Ceremony every year,’’ McBride said. “They support veterans funerals. They also supported the Operation Chillout event at Vasa Park. Once or twice a year the veterans visit every school in the district and the police department is always there to support us. Thank you.’’ That award was followed by a presentation by Michael Marino the CEO and founder for the newly formed Washington Township Police Foundation. The non-prot foundation raises funds and awareness for the police and other rst responders. Its rst fund raiding event, a car show at Ort Farms, was a rousing success. “The goal is to nd ways of bringing the community together,’’ Marino said. “To nd ways of raising funds and raising awareness but to do it in a way that we can enjoy as a community.’’ 9/20/2019 Page A12 | Observer-Tribune | newjerseyhills.com https://www.newjerseyhills.com/observer-tribune/eedition/page-a/page_5229ec5b-5640-50d6-b04d-bd769bfb7dd4.html 2/2 He presented a check of $500 to the Washington Township PBA Local 301. Also presented were a check for $500 to the Washington Township Police Department for use or to purchase additional equipment and checks of $250 to the Long Valley First Aid Squad and a check for $250 to the Fairmount Fire Company. Almer said the money the police was receiving was going to be put towards purchasing ballistic vests for ocers in all the cars that will be strong enough to stop a rie round. The presentation was followed by Murello’s resolution dedicating the naming of the Police Department’s Training and Emergency Operations Center for Chief Kluetz who died on June 14. Kluetz served as chief from 1971 to 1995. He was also a life member of the Long Valley Fire Department, the Long Valley First Aid Squad, the Morris County Police Chiefs Association, the New Jersey State Police Chiefs Association and the International Police Chiefs Association. “Chief Kluetz was inuential in our accreditation process ,’’ Almer said. “He was a mentor to me through the years. He knew that we were accredited on June 13 and he passed on June 14. I’m very happy that he was aware that his department successfully achieved its goal.’’